Day three and I’ve arrived in Guangzhou (Canton in 1877). This city came at the end of my three week race around China. Beijing was my introduction, and a rather imposing one, all the more intimidating for mostly being closed. Streets were cordoned off by soldiers, Tiananman Square and The Forbidden City were both closed. On reflection this strikes me with a sense of irony which at the time was lost to a mild irritation at being unable to see much of Beijing in the few days I had there. I spent almost as much time at Beijing train stations as I did sightseeing. I might have spent more time at Beijing train stations. I arrived at Beijing West (Beijing Xi Zhan) eight hours before my train. My intention had been to leave my bags and visit the Summer Palace. Once in I couldn’t find a ‘left luggage’ and showing my ticket and trying to explain, to ask, I was simply ushered deeper and deeper into the station. There were so many checks and gates and scanners to pass through I wondered if I left would I ever get back again. My last day in Beijing was mostly spent at Beijing Xi Zhan. I passed time talking to Dieter, a pleasant German man on his way to a new teaching job in a rural part of Western China. We stood out like sore thumbs and gravitated towards each other fairly easily. Unfortunately his train came and left several hours before mine. It gave me plenty of time to assess the whole business of waiting for trains in China though. There is a particular procedure in each country and in China everyone waits patiently in the waiting room, closed off securely from the platform. Not that dissimilar to the UK, people wait with bags on seats for imaginary people to sit on. A request through the use of mime and performance to sit on the seat is greeted with disdain and disinterested confusion. The seat is clearly taken, of course I cannot sit there. the waiting room is intermittently packed and almost empty, filling and emptying with each train passing through. As soon as the train is in sight there is a stampede of people who appear to come from nowhere. I sit and wait, the crowd thins and I board my train to Xi’an.

The scale of the population explosion is starkly apparent as there is less space for more people to inhabit. After what now seems (with the benefit of rose tinted glasses) a cosy week or so on board a train and travelling through more rural areas of Mongolia, even with oversized intimidating statues of Ghengis Khan overshadowing nearby mountain ranges, Beijing and China were big and daunting. The Great Wall was great and the Terracotta Warriors were formidable. A calm (ish) pause in Hong Kong and I return to China, cashing in my double entry visa I worked so hard to get. Despite Hong Kong being returned to China in 1997, it still counts as another country if you want to go back in. They made me work hard for this (my application was rejected twice) so I wanted to make the most of it. A few days in glorious Guilin and Yuangshuo followed but in the mean time I needed to catch up with Annie in gruesome Guangzhou.

“On the outskirts may be seen prisoners in chains, or wearing the cangue, imprisoned in a cage, or else suffering one of the numerous tortures inflicted in this country. I did not go to see any of these horrors, neither did I visit the execution ground; but some of the party did, and described it as a most horrible sight. Skulls were lying about in all directions, one of which had been quite recently severed from its trunk, the ground being still moist and red.” Annie Brassey, Friday, 2nd March 1877 (A Voyage in the Sunbeam). 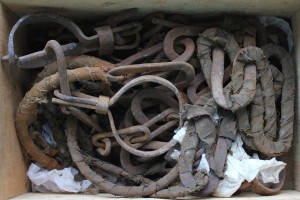 The chains (pictured above) are covered in fabric, presumed to reduce the amount of noise they make as prisoners walk and move in them. Unfortunately there is only a very scant label attached with the box, the

An estimated date of around 1900 is suggested by Julian Porter (Museum Curator). However, as the box gets examined more closely the label on the side is noticed to be dedicated to the Lady Brassey collection. The inscription is crossed out in black marker pen but it prompts an interesting discussion as to who else would have brought such things back to Bexhill, and that they may indeed be earlier than 1900. Annie has a wide and varied collecting behaviour, she may well have deemed these an appropriate item to bring back to show people at home how people were being treated in China. Or she may not have. We will never know. It is curious, the overlaps and weaving of Annie with my time here. She is inherently a part of it, she is the reason I am here. Yet the network of information and gaps in documentation create all kinds of spaces for wonder as well. 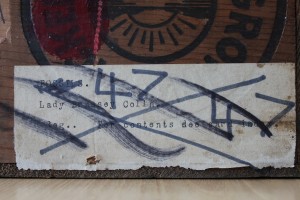 Label on the side of box of prison chains “Lady Brassey collection” crossed out. Bexhill Museum. Louise Kenward (2015)

Re-reading Annie’s experiences in Canton I also find reference to the foot binding mentioned in ‘day 2 – revisiting Hong Kong’ where I worked with some miniature embroidered silk on linen shoes. These were also Chinese but had temporarily crossed the border with some artistic licence.

“…poor little women tottered and tumbled on their crippled feet, holding on to one another, or leaning on a stick.” Annie Brassey (A Voyage in the Sunbeam) 2nd March, 1877. 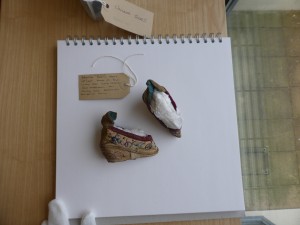 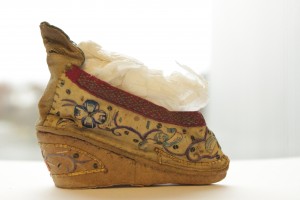 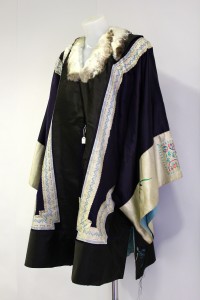 “One platform change, one pain au chocolat and a sixteen minute delay from Brussels to Cologne.

..splashes of red as Autumn leaves are turning, I leave behind the Summer”

Less than twelve hours away from home and I am wondering if this is a good idea. Of my ambitious plans how many would I manage? The idea of arriving at Minsk for midnight is less romantic than it sounded in my head, in the comfort of the travel agents office, with a nice cup of tea. After a short stop in Belarus I am then to negotiate Russia, and then China, the one place on my itinerary greeted with almost universal concern. For now though there is too much to focus on. The trip is too big to worry about. One thing at a time. I will just concentrate on what is immediately ahead of me.

The rhythm of the train is soothing. Ticket inspections reassuring. I am looking forward to morning coffee in Brussels and then Cologne for dinner. 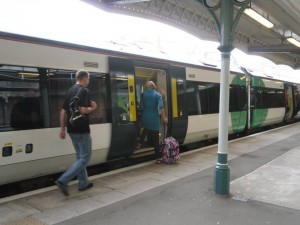 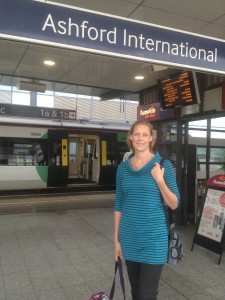