“Waking up in China to a densely built up landscape. Gone are the forests of Siberia and the golden plains of Mongolia. It is autumn again, time goes backwards and we briefly travel through more familiar pine forests and woodland. Auburn leaves cling stubbornly to branches. It is rocky and flat alternately. There is evidence of agriculture with ploughed fields, the first since Siberia. The view is changing much more quickly now. Inhabited to wild, agriculture to city scape. House construction is different, older properties with tiled roofs. Evidence of man is more frequent here…”

It felt like I’d been cocooned by the train, my home for a full 7 days and nights of the three week journey. I have come to the end of my Trans Siberian/Trans Mongolian train journey. Nearly three weeks after leaving Moscow I am about to arrive in Beijing, leaving my new family behind as we all take our own paths onwards… 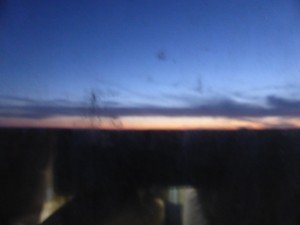 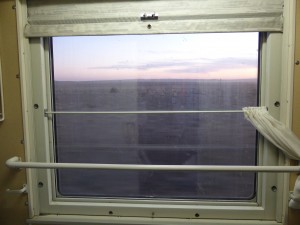 My view has been framed in this way for such a long time, I will miss the train. Louise Kenward (2013) 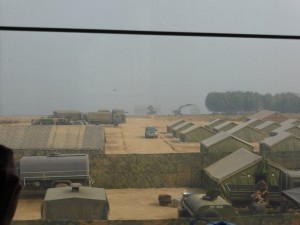 “Arrived 7.55am on sleeper train from St Petersburg, leaving at 23.55 last night.

It felt a one time luxurious cabin with cream and red curtains of swags and tails at the window and a vase of artificial yellow roses on the table. It had seen better days, but more than hinted at how train travel had been regarded. We were given glasses in ornate silver metal holders filled with hot water on request. Although soon discover they are not for lingering with as disgruntled staff take them back again.

I share this cabin with Leah, Shenny and Cynthia. Two bunks above and two below. Bags and cases are wedged into every available cubby hole. Shenny soon begins her morning routine of insisting on photographs of us all, at every junction in the journey, in every possible combination, from every perspective. An almost hour by hour account of the next three weeks of my journey commences. An enthusiasm I have never encountered before. A broad grinning face and warm demeanour, she is impossible to refuse and a joy to be around. Counting our days through the journey to Beijing she is totally un phased by anything. A level of energy I can only imagine…” 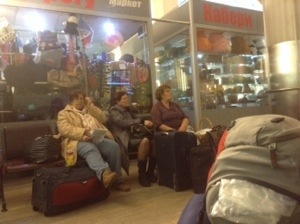 Waiting for the train at Moscow, Louise Kenward (2013)

“8am local time (somewhere between Moscow and Beijing), 6am Moscow time – the train will remain on Moscow time until we reach Beijing. This initially entertains me but is becoming increasingly confusing. I adjust my watch accordingly so as to ease myself in to changing time zones, and to arrive in China at a reasonable time of day. It makes for more complicated station stops though, assuming the train is running to schedule.

I’ve just realised the last entry was probably yesterday, so Tuesday not Monday, or Wednesday, possibly.

Early morning calm and more trees are yellowing or have lost their covering for the winter. A soft pink/peach filled the sky earlier but now it is a purple grey with smatterings of blue and white. The stark trees continue to line the tracks. The ‘bathroom’ is becoming increasingly fragrant. Ingenuity through necessity I’ve had a warm wash from the boiler this morning, taking great care not to drop anything on the floor.

The attendant has returned the creased, yellowed, slightly stiff netting to the lower parts of the windows, serving neither function or aesthetic. It is removed again as soon as she is out of sight, folded unceremoniously and stuffed through the elastic cord suspending it, so we can watch the travelling landscape.

The gentle swaying of the train and the noise as everything moves with it is vaguely calming. The temperature reads 27ºC above the door at the end of the corridor – it is very hot, we are not allowed to open the windows. We’ve tried, they are quickly closed again. Communication in this respect is clear and facial gestures and hand signals indicate that window opening is not approved of. I don’t know why. Perhaps to add to our discomfort. It feels punishing rather than comforting. Two more time changes are passed through and my watch is duly altered. I think that makes five, or six, and another night is spent on a train. I’ve relinquished myself to the journey and its time frame. The one thing that is certain is that the train will ultimately arrive in China. Everything else is frivolous detail.
For the wilderness, there is great activity on the railway. Lines are busy, long freight trains take forever to pass, blocking light for many minutes at a time.”

“I hope to discover that these were here when you visited Annie [Annie Brassey]. I’ve yet to learn more of your time in St Petersburg, but I think I can assume there wasn’t a burlesque club opposite. The rivers would have been here though, palaces and churches…
It is a welcome sanctuary from Nevsky Prospect [the Botanic Gardens]. Tour completed, spoken entirely in Russian, I am none the wiser but enjoyed access to the temperate green houses. The warmth and luscious greenery of the inside contrasted starkly with the lacklustre and bitter cold of outside.
…Collected small stone and three acorns. Admission ticket stitched into diary and leaf that fell from tree as I was writing.”

“One platform change, one pain au chocolat and a sixteen minute delay from Brussels to Cologne.

..splashes of red as Autumn leaves are turning, I leave behind the Summer”

Less than twelve hours away from home and I am wondering if this is a good idea. Of my ambitious plans how many would I manage? The idea of arriving at Minsk for midnight is less romantic than it sounded in my head, in the comfort of the travel agents office, with a nice cup of tea. After a short stop in Belarus I am then to negotiate Russia, and then China, the one place on my itinerary greeted with almost universal concern. For now though there is too much to focus on. The trip is too big to worry about. One thing at a time. I will just concentrate on what is immediately ahead of me.

The rhythm of the train is soothing. Ticket inspections reassuring. I am looking forward to morning coffee in Brussels and then Cologne for dinner.