After a good meal, shower and Banya, I can be a little more reflective and am feeling somewhat more poetic about this marathon train journey. Only when it isn’t there can I recall the ‘clickety clackety’ of the train which became a soothing constant for the duration, and which I found I missed last night, along with the gentle rocking motion of the carriage. It took most of the day and last night before my sense of balance and internal systems settled into a more stable world.
The journey felt almost a journey through time, with a repetitive landscape, a sense of the surreal could be had, while also a notion of the changing seasons. We started the week in the early stages of autumn, with leaves yellowing, by mid week they were shades of amber and at the end were spartan, with a fitting smattering of snow this morning to complete the transition from autumn to winter.
Along the way, I can recall the excitement of spotting the intermittent tumble down wooden cottages that sat against the backdrop of forest and wilderness alternately. They could have come directly from a fairy tale with wisps of smoke dancing from the chimney, suggesting a cosy comforting interior filled with baking and colourful blankets (or a wicked witch depending on the story book). We imagined what it would be like inside, fantasising of warmth and comfort, set against the hardship of living in such harsh and unforgiving landscape. I remember the enormous woodpiles and occasional glimpse of someone tending to their garden, of the impressive allotments (mostly growing cabbages) and the self sufficient contentment of life that might be possible somewhere so remote. Inside the train itself we became our own little community, of bartering and sharing goods, trading information about timetables and platform stops and sharing in the delight at discovering there was toilet roll and hand towels in the toilet. A liminal space, a cocoon between stations and destinations, crossing paths with some and joining in unity with others, a shared connection of a world within a world, seeing things in miniature and dwelling on the minutiae as you pass through landscapes of incomprehensible scale. 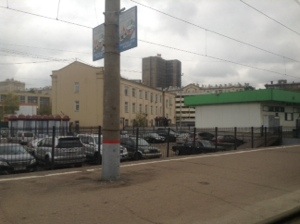 2 thoughts on “Reflections on ‘five days on a train’”