Boarding the train at Barabinsk the last stop is Irkutsk. The ‘Paris of Siberia’ we are told. We do not believe. It is a little dour as cities go (even for Russia). It has some of the scale of Russian cities visited but without the sparkle. We are now deep in the depths of Siberia and for that reason alone it is exciting.

From Irkutsk it is possible to reach Lake Baikal, the largest (and possibly oldest) fresh water lake in the world. It has been there for twenty five million years. This is all very impressive and stories go, as they so often do, that a dip in the icy waters will bring eternal youth. I’m afraid I ducked out of the challenge and instead opted to crochet. There are no particularly sheltered spots anywhere, least of all at the lakeside. So after regaining feeling in my fingers  I chose to place three pebbles on a piece of driftwood and left them to fend for themselves. 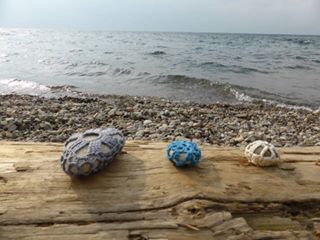