While planning my trip, one of the things I dreamed of was to start the new year in Bali, with an apartment on the beach of white sands and aqua seas. It would be a calm and restorative period after a frenetic dash through Europe, Russia, China and South East Asia. A romantic notion perhaps, based on nothing other than my own imagined ‘Bali’. 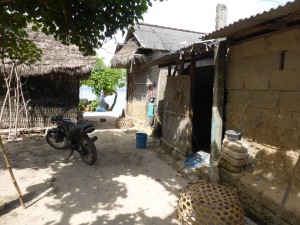 I love the sea. A good part of the reason I chose my flat in Bexhill was to be close to the sea. It was always a height of excitement to be the first to spot it on a journey to the coast (my recollection was also that this was often in St Leonards after visiting an elderly relative!). Camber sands were a favourite, and admittedly hard to beat. I still have a book that was a present from my nan. ‘Wizwam and me under the sea’ was one of those books that had my name in the text, along with friends and family. It took me on a journey with a man in (rather alarmingly) a large pointy hat, long white beard and floor length heavy cloak (we would have drowned for sure). We met all manner of sea creatures and it was one of the most magical and treasured things on my bookshelf. Still is.

I’ve always swum and love watching fish, everywhere I’ve lived has eventually had a pond or been close to water. I find it calming, hypnotic almost, and on a trip to the Caribbean over 10 years ago had my first introduction to ‘the sea’ with a chance to go snorkelling. It was, however, one step too far. I hated the notion I did not have any peripheral vision and an unmitigated fear of the sea’s ‘largeness’ overcame me. I saw nothing I couldn’t see from standing up to my knees in water and looking downwards.

The notion of scuba diving has thus been one of those longed for aspirations, held with awe and wonder. 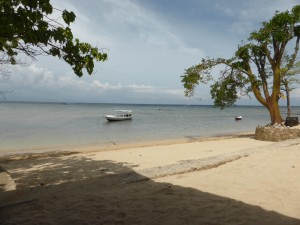 In Thailand, off the island of Phi Phi at the end of last year, I went snorkelling. Jumped off the back of the boat and floated face down for what could have been hours. It was singularly the most exhilarating and colourful sight I may ever have seen. I had no sense of time, captivated by this whole new world beneath me. Last week I completed my PADI Open Water Diving course.

Nusa Lembongan will now always have a place in my heart. I brazenly booked onto the course the week before while in Ubud. I also booked a beachfront room. It truly was beachfront. I fell off of the boat from Sanur and onto the verandah. I could watch the sunset from sitting on the bed and listened to the sound of the sea while I fell asleep. It really was charming. On my second day I turned up to start the course. Kitting up I sustained my first serious injury, taking a lump out of a knuckle putting on my wetsuit. Most of the day was spent feeling awkward and ungainly, like a giant baby duckling, ridiculous feet and severely top heavy. The equipment took some getting used to. As you will know if you read my last post I haven’t any recollection of ever feeling seasick. My first open water trip was hardly five minutes away and I felt awful. It was better once in the water but the sea was really rough. I eventually sunk to the bottom (buoyancy is apparently something I have a particular natural aptitude for, not necessarily a helpful one when trying to sink). Feeling ropey and now confronted with the very real issue of being under water at depth and the largeness of the sea, I promptly went back up again and sat on the boat, progressively feeling worse while waiting for the rest of the group to return from their ‘fun dive’. The second day was worse. I was gutted. A part of me thought that this may have been it. I had given it a good go but would have to stick to the surface for future aquatic aspirations. 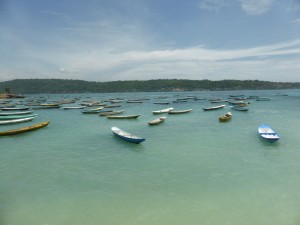 Enter ‘Wizwam’…South African dive instructor he had neither pointy hat or white beard, but he took me under his wing and I had what seemed like undivided attention for the next three days. This was promptly after I literally did, fall out the boat, landing on my backside. There’s no dignified recovery from that. It probably wasn’t the best of first impressions. Ursula Andews I was not. Learning all the theory and practising all the skills I needed in the pool, helped to put everything in perspective. It also got me a bit more used to the equipment and the new sensations that come with using it. All I had to do now was overcome my fear…

Getting in the water is fine (that was one of the things I expected to be a bit more bothered about), I even did a full backward roll once or twice. Again, sinking was an issue. Heavily weighted down it goes against your very nature not to take an almighty deep breath in before going under! Still, with patience I did indeed make it down there. It was like being in an aquarium. The water was a beautiful aquamarine and the white sands, beautiful corals and stunning abundant fish life made me feel like one of those little models of scuba divers you see in fish tanks. This is an incredible world. Most of my time was spent, however, concentrating on breathing (I know!), equalising (making sure internal air pressures adjust as you are exposed to greater outside pressure) which involves the sort of things you do when you fly, like swallowing. Swallowing is much harder under water. So my internal world was a little less calm and tranquil than the world around me. Two dives down and I have noted in my log book that I have seen parrot fish, chromis, wrasse, anenome fish, surgeon, sergeant fish, a trumpet fish, goat fish, lion fish and a nudi branch! woo hoo! This is brilliant! But tomorrow is my deep dive.

I go through the same process of excitement and terror. This is not helped by the previous evenings after dinner conversation of sharks, nitrogen narcosis and sudden death. That diving sense of fun! Very little has remained in my stomach for any length of time all week. I woke up at 4am. Joining the rest of the divers out on the ‘big boat’ was great though. Chance to chat and see the ‘regular’ person who goes diving while abroad. I also don’t have many skills left now to sign off, most of the hard work has been done leaving me to focus on breathing, swallowing and sinking. How hard can that be?

Two nearly hour long dives to 18 metres later and I’m totally smitten and have achieved everything I needed to do in the water to qualify. I’ve seen trigger fish, cornet fish, striped cat fish, butterfly fish and anthias, had lovely conversations with other people who dive ‘for fun’ and seen two beautiful reefs off the coast of Nusa Lembongan and Nusa Penida. My heady state of euphoria is only maintained with a relaxing afternoon walk up to the Mangrove to sit mesmerised at the calmness of the lapping sea as I drink my mango lassi and then get whisked away by the charming Baxty for a row around the Mangrove Forest. 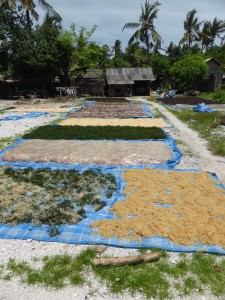 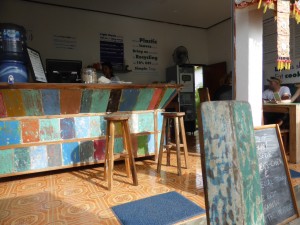 Bali, and indeed Nusa Lembongan has been all I hoped and more. Having spent a week there (one of my longest stops in four months) I feel quite at home, a part of the furniture almost. Alas I am not and I need to get the boat back to Bali Monday for my flight to Borneo. This is some solace to be leaving the island with and I make plans to find a dive centre when I reach Kota Kinabalu. This is not something I will give up on easily!

2 thoughts on “Under the sea”