‘Trail of breadcrumbs’ is an ongoing series of small scale works plotting my journey around the world. Temporary, transient pieces placed at regular intervals serve to act as the fairy tale ‘Hansel and Gretels” ‘trail of breadcrumbs’ (left in case they got lost, so they could retrace their steps). Pebbles are collected and covered in crochet before being replaced or positioned in a new site.  Emerging from the desire to make work as I travelled between places called Bexhill, this became a great way of meeting people and inviting comment about the project.

One of the pebbles made was sent in support of the Knitting Nanas, whom I met at Bentley during the blockade at the ‘Lock the Gate’ campaign. A short distance from Bexhill, New South Wales, this is an issue close to the heart of the community who successfully stood against drilling for Coal Seam Gas. The Knitting Nanas and many others have subsequently participated in an exhibition of art works relating to Bentley and the ‘Lock the Gate’ campaign (which continues). They included the pebble I sent them as part of this. 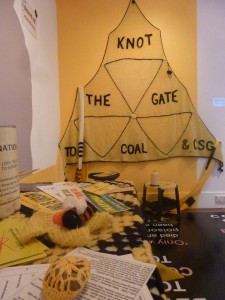 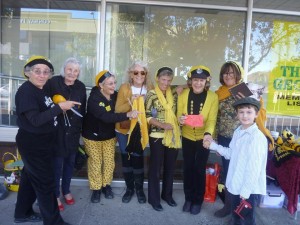 The exhibition is open in Galleries 1 and 2 at Lismore Gallery, New South Wales, until 6th September 2014. ‘Protest Songs: Artful Actions’ is an exhibition of work by artists and activists which gives “visibility to issues” through “creative means”. You can read more about my dawn visit to Bentley here with the fantastic news of Metgasco’s licence to drill having been suspended shortly after I left Australia (Gasfield Free Northern Rivers information source).

One thought on “Trail of breadcrumbs”