Alice Springs: a homeless day service run by the Salvation Army entirely occupied by people of aboriginal descent, others are ever present, wandering the streets trying to sell their paintings and get their bus fare home. Large expensive shops selling ‘original aboriginal art’ seem to be just about the only place I didn’t see any actual aborigines. Much is made of the ‘Dreamtime’ and the art work and the sacred sites of the aborigines, almost as if they weren’t there anymore. I have tried to be balanced in my approach here and am conscious of how recent some of the atrocities have been, many in living memory still. These are things that cannot be changed now, but again and again I have encountered this inequality of what tourists are taken to visit and who is taking them. Many projects are much better than others at listening and engaging with the aboriginal communities, and many of the tours I went on were very good at discussing this, others were dreadful and some simply refused to discuss it at all. It is clearly a complex issue and one that Australia is struggling to get to grips with. 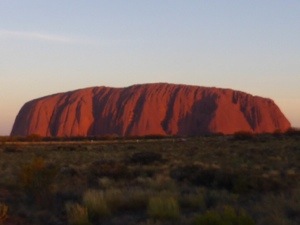 Since Alice I have seen hardly any aborigines, a few travelling on the trains but none in the cities of Melbourne or Sydney, even fewer on the eastern coast as I journey from one town to another through Queensland. Except for Townsville, I saw several in Townsville (I also had a lot of time in Townsville so saw more of it than was entirely necessary – stranded by cyclone Ita). Even the Lonely Planet cites Townsville as having an underlying level of racism. I have also encountered many who were not begging or selling paintings on the streets, going about their day to day lives, families play in parks and people go to work, just like anyone else. There remains a significant disparity however, generally speaking, and this is what I have been trying to get more of an understanding of.

A tour of the Blue Mountains introduced me to a great tour guide who, at the end of the trip shared that his grandfather had been one of the ‘stolen generation’. Taken for adventures where they navigated their way by the stars, his grandfather never spoke of his childhood. His grandfather had been taken from his family in one of many attempts to ‘assimilate’ the indigenous people. Placed with an Irish farming family he was taken as a slave, not young enough to be put into an orphanage and not old enough to be killed. They think he must have been about 15 years old to have been ‘saved’, not yet a man, but a boy who would have gone through many of the teachings and ceremonies on his way to manhood. 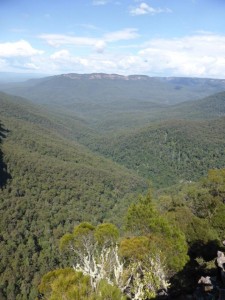 While there seems to be some progress made in re establishing land rights to the aborigines, now acknowledged as the ‘traditional caretakers’ of the land, and this is cited in all the National Parks, it seems that a great deal of inequality remains and a good deal of trauma still to recover from. In many parts of the country the aboriginal tribes were completely wiped out. With those that survived this atrocity, the introduction of Europeans and their wayward ways of alcohol and sugar have been too much for some to cope with, impacting detrimentally on many communities. For others they are, despite everything, surviving and surviving well.

Tasmania: a plaque marks the spot of the last death of an aborigine. Treated particularly harshly in Tasmania, aborigines were systematically killed, and appauling treatment meted out.

Fraser Island: one of the key tourist destinations along the east coast of Queensland, where aboriginal tribes have been completely wiped out, no direct descendants remain. In some attempt to hold a vestige of the history there are sites which remain notionally sacred, where aboriginal men cannot visit because it was a ‘woman’s place’, like the creek which was a site for giving birth. This information is still told but it does rather have a hollow sound to it, and a feel of stable doors being shut long after there is a horse.

I take a trip, sailing around the Whitsundays and to the infamous Whitehaven beach. The most beautiful beach it seems impossible to exist, with swirling pale turquoise waters of multiple shades, changing as the tide comes in and goes out, painting an ever changing scene over white almost pure silica sands, the softest I have ever walked on, they don’t even burn your feet. Beautiful white sands, like the ones you see in the photographs of distant exotic lands. Yet this is set in such tragic history. The Ngaro tribe were the previous inhabitants of the area, signs at look out spots mark their occupation with small plaques saying things like ‘can you imagine the children of the Ngaro people playing and running on the beach?’ and you look down again at the sands and think yes, yes I can imagine the children running and playing there, what a wonderful place that would be to live, to be able to play in the sea and the sands. But there aren’t any Ngaro children running and playing in the sand. It is filled with sightseers over for a few hours at most, trailing through the sites and taking photographs of themselves and each other in well rehearsed poses and group pictures before moving on to the next stop. And it feels terribly terribly sad. Many of the tribe were killed by European settlers, and many settlers killed by the Nguro. In seeking to establish a truce a meeting was called at this very beach. Alas the Nguru people did not stand a chance, they were surrounded and killed on the spot. It is said that a curse was placed upon the site and a hollow deep sadness sits heavily in this beautiful place behind the facade of tranquility.

Maybe it’s a no win situation, if there are no such markers or reference to the previous inhabitants of the land then they are wiped out entirely. If there is, it looks insincere. Perhaps I am expecting too much, but perhaps it is the slightly clumsy way with which things are done that leaves it feeling like the original people to live in these places are again being taken advantage of.

Considered to be the oldest living community to walk the earth, carbon dating has found evidence of aboriginal existence in Australia for some 70,000 years. This bears such significance it questions the ‘out of Africa’ theory of evolution. Living with their environment, through two ice ages, surviving in some of the most inhospitable places that exist, there are probably one or two things we could learn from them.