Looking back through my journal I read about the first things I noticed on reaching Malaysia. I was struck by the peculiarity of the familiar. English is widely spoken, electric sockets are the same as the UK. The wide motorways are soulless. Well manicured, it seemed everything had been tamed. Roads are lined with palm oil plantations. I felt more disconnected from the landscape with a desire to keep going.

Rifling through the museum’s archives, a fly whisk is found. Much later than Annie, it is from the mid 20th century. Made of coconut fibre I become fascinated with the knots of fibre at the base. These curious details become the focus of my drawing, frustratingly hard to keep track of which knot it was I was following. 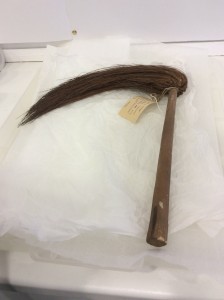 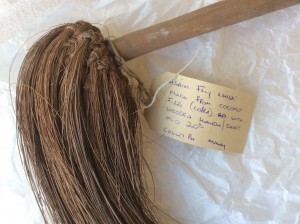 Annie visited Georgetown and sailed along the Malacca Strait while travelling from Hong Kong to Ceylon (Sri Lanka). A Voyage in the Sunbeam gives the following account:

“While the doctor was on shore, we had been surrounded by boats bringing monkeys, birds, ratan and Malacca canes, fruit, rice, etc to sell, and as I did not care to go ashore, thinking there might be some bother about quarantine, we made bargains over the side of the yacht with the traders, the result being that seven monkeys, about fifty birds of sorts, and innumerable bundles of canes, were added to the stock on board. In the meantime Dr Simon had removed our invalid to the hospital.

Malacca looks exceedingly pretty from the sea. It is a regular Malay village, consisting of huts, built on piles close to the water, overshadowed by cocoa palm and other forms of tropical vegetation. Mount Ofia rises in the distance behind…By one o’clock we were again under way, and once more en route for Penang.” Tuesday, March 20th, A Voyage in the ‘Sunbeam’ Annie Brassey 1878.

Louise is at Bexhill Museum every Thursday, as Artist in Residence she is exploring her journey, with Annie, in the context of the collection in the archives. This is made possible thanks to a Heritage Lottery Fund Grant.