Last day in St Petersburg with plans to find the dream museum. The sun is still shining and turrets of gold glittering. After twenty minutes walking from Gorkovskaya metro station and a pot of jasmine chai later, I discover there is a second Bolshoy Prospekt on the map. I decide to continue walking, the other Bolshoy Prospekt is not so far, I just hope there aren’t more than two.
Spotting a sign for ‘Oedipus Centre’ outside a door I double back and look more closely to find a small brass plaque saying ‘Freud Dream Museum’. Ushered down an anonymous corridor I wander for a while, able to identify nothing that would suggest a museum of any kind. Retracing my steps back down a staircase I tentatively push at a door. Room 104.
Greeted by a friendly face I am assured that this is the museum, and warned that it is not like any other, I shouldn’t have expected anything else. The attendant goes on to tell me that the Dream Museum is based on the virtual and imagined world, not of physical reality. With links to the Freud Museum in London and the Freud Museum in Vienna, St Petersburg has no association with Freud with regards to where he lived or worked, it does not house any of his belongings. I see photographs of objects I have seen in the London Museum, in itself this has something of a surreal sense to it. Housed in the centre of Psychoanalysis, the Freud Dream Museum is more about the spirit of Freud and his works that inspire and curate the museum. I learn that the director of the centre has links with London and Vienna, and it seems a more playful interpretation of the works of Freud. It’s a “museum of psychic (not material) reality”. The museum is described as an installation, a space to immerse yourself in, consisting of a light room and a dark room, it is said to represent the preconscious/conscious and preconscious/unconscious.
The dark room is of most interest as a space it is more possible to be immersed in. Suspended from the ceiling are rows of fishing line holding text, images, objects and shards of mirror. A series of interconnected layers are intended to encourage changes in perspective and ambiguity. The two walls to the side of the room are flanked with these layers, all enclosed behind glass, another reflective surface, the central wall holding a screen playing video of moving ambiguous images lends itself as another space to project onto. 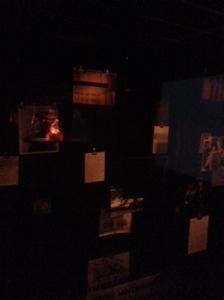 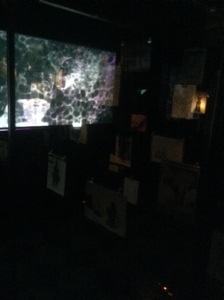 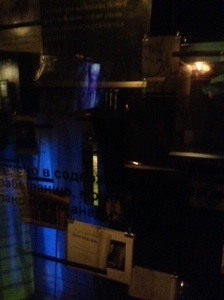