Returning early to New South Wales for my flight on to Canada, I spent my last few days in Bexhill. Spending it in the village with Liz, Denver and Reece made it all the more special and was an opportunity to see Bexhill from another perspective.

Positioned ‘on the edge’ at the border of Bexhill, Cosy Camp farm is the name of a place found only in story books or nursery rhymes. Overlooking idyllic countryside the dairy farm has been in Selwin’s family for several generations. Not for the first time the longevity of a place and a family’s history is described to me in terms of its cow occupancy. 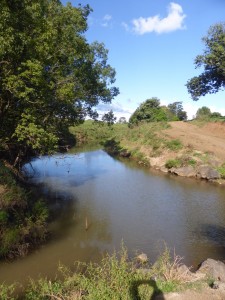 People have been very generous with their time and hospitality and I have come away with new friends and rich resources for further perusal and research when I return to the UK. Books on local history, the school, and also the aboriginal tribes who lived in the area before European settlers ever arrived – and who wisely lived at the top of the hills rather than in the valleys where all the ‘new comers’ settled, and promptly got flooded. These along with family stories and anecdotes I shall keep safe until time allows that I can write and (I hope) do these precious stories justice on my return home.

One of the trips I made with Liz and Reece was to Protesters Falls, Nightcap National Park, just outside of Bexhill (and can be seen from the Open-Air Cathedral). This stunning site was preserved after what was the first organised protest in Australia to protect this beautiful place from the logging industry. The first organised protest and a successful one at that, as the area, now preserved for future generations as a National Park, it seems amazing that it would have ever been under threat. Lismore has seen a variety of incomers over the years, and this is one of the things that makes the area of Lismore and it’s surrounding villages (including Bexhill and Nimbin) such an interesting place. An area predominantly of cedar cutters and dairy farmers since the nineteenth century, the influx of people to multi occupancy residences following the Aquarius festival in 1973, has led to a more diverse population and cultural environment with a rich mix of attitudes and beliefs. It is widely agreed and accepted now that Protesters Falls is an area of beauty that should be preserved and looked after. 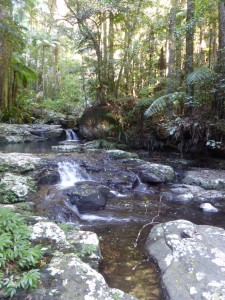 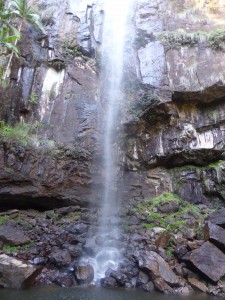 I am awoken, however, my first morning in Bexhill to travel to the Bentley site for a sunrise start to support protectors in what is the most recent threat to the local environment. Coal Seam Gas and the fracking industry it seems is the modern day equivalent of the logging industry. Bentley is the site that Metgasco plans to mine for gas with potential detrimental impact on the community and environment surrounding, including Bexhill water supply. Having left the UK not long after protests in West Sussex at Balcome, this becomes a new link that connects us across the world. Community is not so different and nor are local issues or concerns. The current one is CSG and as I write I understand that police involvement is getting ever closer. If Metgasco can be kept from Bentley there is chance that New South Wales can protect itself where Queensland could not, and they will provide hope that once again it is possible to protect the environment in ways that perhaps others can learn from, and which will in the future be seen as a generally good idea. This seems like a much better idea than using unconventional mining techniques that remain untested as to the potential they will have to undermine the foundation of local environment, leaving scars across the landscape, and (as I understand) all for a company to be able to quick freeze their yoghurt. It is possible to find out much more here in this recent local article. I have been particularly struck by the influence of the wonderful Knitting Nannas and local farmers who are taking a stand together and showing that this is not a protest of the ‘extremists’ or the ‘activists’, but a local community coming together to protect the land. 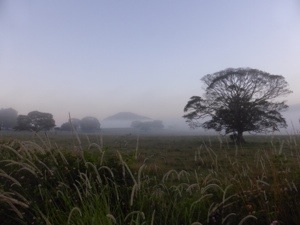 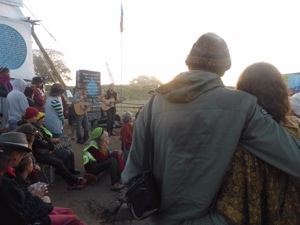 The ‘Lock the Gate’ campaign also has the support of the local Mayor, Jenny Dowell – which also goes to show the strength of community here. During our conversation over tea and custard creams, Jenny shared with me some of the stories and context within which I find Bexhill and Lismore today. The history of the festival, the cedar cutters and the way the community adapts to challenge and new comers was a fascinating insight that helped to put things into a more rounded perspective for me. This was not just a small village with pretty countryside, but something with more depth and contrast that could be easily overlooked on first sight. 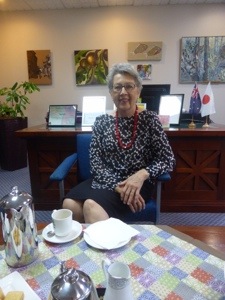 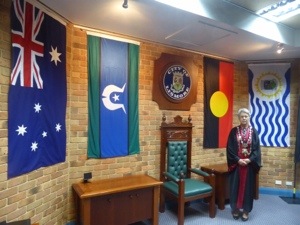 I am now leaving Bexhill, New South Wales for Bexhill, Saskatchewan (Canada). Themes of humanity and community have been strong throughout my journey and to have spent more time in this small village has confirmed that our links and connections are far greater than the fact we share a name.