The first pebble was more of a stone than a pebble. I’m not certain what the difference is, but train line stone chippings were the best available, and suited the purpose well enough. It became apparent that this was likely to be a common situation. Travelling by train so much, without access to beaches, railway chippings work just as well. They aren’t smooth, or as nice to handle granted, but the size is right, they are readily available, and they are directly connected to the journey.

This was my first. The stone was collected at Omsk station (Siberia) during a stop on the Trans Siberian line. It is a careful choice, trying to find the most even, rounded piece, of ‘suitable’ size. Like Goldilocks, it could be neither too small nor too big. Clambering across the tracks was a common enough practice here so I had a decent chance to find ‘the right’ one. It is a big station, there are a number of tracks and platforms, babushka’s selling things made of cabbage and potato, bundled in many layers of clothing. Passengers from the train get off to stretch their legs or smoke a cigarette. Guards stand at carriage entrances wearing heavy navy woollen uniforms with smart hats and stern faces. Station attendants check things and pace the platform purposefully.

I boarded the train as it prepared to move on. I made a cup of tea and settled in to the next part of the journey. My tea went cold, and by the time we arrived at Barabinsk my first stone was ready. 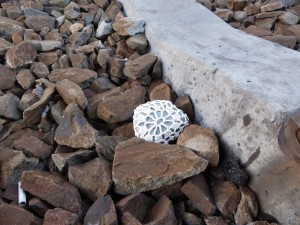 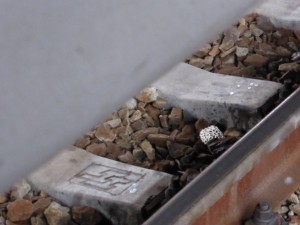 As much care and consideration was taken as I could afford on the placement of this stone. The stop was not very long and I was not keen on getting left behind. It is another two or three days before the next train to Irkutsk. Shortly after the stone was placed, another train came into the station, rolling along the track above it. My stone was safely under the train and a part of its surroundings, it’s journey had begun.