Arriving at Split by ferry was such a great way to start my journey through Croatia. The sun had only just come up as I left the boat, so I missed the view of the beautiful Dalmation coastline but it was a great start to the day. A huge ship, travelling from Ancona in Italy, there was only a couple of dozen of us on it. It seemed a little excessive but I was grateful it was still running. Many have stopped at this time of year. My next mission to find the train station was not difficult, I crossed the road, it was not much further than that, stumbled upon as I made my way towards the city centre. Train tickets through Croatia cannot be bought online so with great relief I finally was able to arrange my trip to Budapest, with an unexpected afternoon in Zagreb as there are no night trains currently. This has now stripped my time in Budapest back so far I have only one day there. The journey during the daytime will give me chance to see much more of the countryside though. 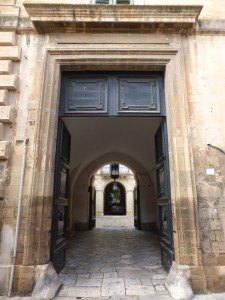 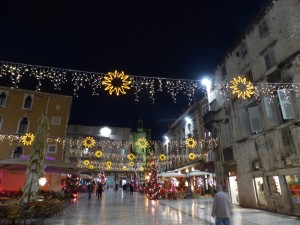 A UNESCO heritage city, Split is (as you might expect) beautiful. The old town, the palace, is a maze of narrow paved streets with towering walls filled with peoples homes, shops, restaurants and cafes. Interspersed with squares where advent is in full swing, with Christmas lights, decorations, music and market stalls. The Riva (waterfront) is filled with people visiting the Christmas markets and enjoying drinks overlooking the harbour. The water is so still it is the ‘wateriest’ water I have seen. At dusk the lights skip across the ripples like a three dimensional impressionist painting. 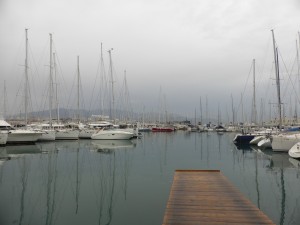 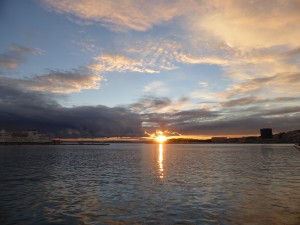 Of my three days here, I spent a morning in Trogir, another UNESCO heritage site, another town filled with tiny streets and tall walls of shutters and terraces. Bridges link the town across the water that surrounds. I would have loved to take the ferry back to Split, but the trouble with travelling in low season is that many things like this are closed. The coastline is pretty and there is chance to island hop in the warmer months. I shall have to make do with my views from climbing the hill at Split for now. 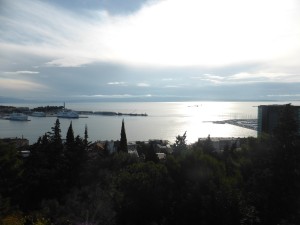 From the top of the hill, overlooking Split (Louise Kenward, 2014)

The sun has been an unexpected welcome addition to my few days here, with the introduction of the ‘Bora’ I have enjoyed blue skies and sunshine. The ‘Bora’ is the cold north wind that is said to make people a little crazy…there is apparently a law in Dubrovnik that renders people only 50% culpable of any criminal act during the Bora! I am still not 100% certain Lana is not pulling my leg.

Leaving Split I must be still half asleep on the train, having dozed off I wake to thick white fog and dustings of snow on the trees. I feel I am still dreaming, it is a fairytale land of almost monochrome. I can see nothing else but more of the same. Travelling out along the coastline and up through mountains we have gone from island views and seaside beauty to rocky barren splendour into a wilderness of winter wonder. The journey has been worth the 200 kuna for the sightseeing alone, a beautiful journey. Most of the trip lacking any evidence of dirty industry or paths of human existence in many places at all. We stop occasionally at apparently abandoned train stations where occasionally someone gets on or off, each promptly manned by smartly dressed attendants in red peaked caps. 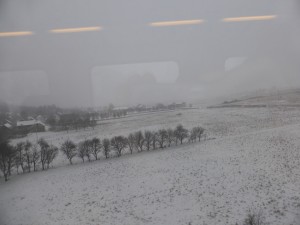 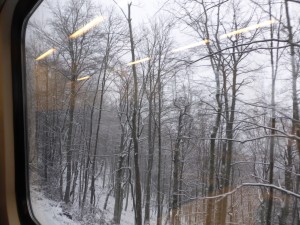