Five days in Kota Kinabalu is a long time. I had to leave Indonesia before my visa expired and joining a tour through Borneo I thought I would get there early. Time to catch up with e-mails, blog, dive and chance to explore Sabah’s capital city.

Arriving at the airport tired from a day’s travelling and wishing (not for the first time) I had applied for that extra long visa for Bali, I emerged in arrivals to an odd dance that I joined in trying to read the name on the piece of paper being held in front of me. There weren’t many other people around and Martin had clearly spotted me long before I was able to read that it was my name scribbled out on an A4 sheet of paper he was holding aloft. Born and raised in Kota Kinabalu the taxi driver assigned to collect me quickly established who I was, along with a surprising amount of personal information before we’d even got to the car. He continued to peer around behind me to check that I really was travelling alone, this seemed to have come as a genuine surprise. Along with age, employment history, family history, where I’ve come from, where I’m going to, siblings – age and employment history and so on, Martin seemed satisfied. Don’t get me wrong this was a two way conversation and he told me just as much about his own family, upbringing and the city I was visiting, I just hadn’t experienced quite such a pace of exchange. The journey to the city was ten minutes. In that time I learned most of the history of Kota Kinabalu, how he grew up in a house on stilts in the water to a Chinese father and Malaysian mother, when most of what now exists of KK did not exist. Ninety percent of the city is built on reclaimed land from the sea. It wasn’t there 30 years ago. There were many more details I’m sorry to have forgotten but it left me with a renewed energy for Sabah and set the scene for what unravelled to become my experience of Malaysian Borneo.

How much of this translates out of context I’m not sure but into this sleepy city in the middle of the night I went and, after establishing that I wasn’t in the hotel I was booked in, I was taken to one I’d never heard of but it seems they were expecting me. The full sized horse in reception with a lampshade on its head and Chinese New Year celebrations a full 10 days before Chinese New Year softened my landing as I thought I should probably just go with it, it made it all a lot easier.

The following morning I went downstairs just to check the horse was still there and it hadn’t been imagined. Nope, still there. Apart from a couple of small children, no one else seemed to notice. Even other people I later met on the tour replied that they also had not noticed and weren’t sure how, once it was pointed out to them. For much of the week there seemed to also always be a small gathering of people waiting in reception. This might not sound peculiar, but day and night a clutch of people waiting were ever present. I never saw them arrive or leave. I was also staying on a floor level that didn’t exist. None of this did anything to ground me in any familiar sense of reality. 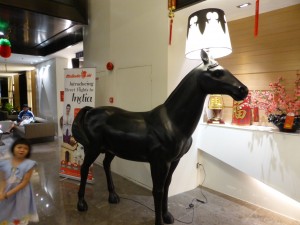 While this tells you little of my trip it does I hope set the scene for my later shoe buying excursion.

I spent a long time planning and preparing for my trip. One of the most important parts was selecting the things I would take with me. A great deal of research went into finding things that were light weight, multi functional and likely to last the course. In particular shoes. I have always had trouble buying shoes. I am taller than average and thus have feet which are larger than average. A source of trying weekend excursions as a child and endless internet shopping as an adult. I knew this was an item that would be especially important for me and was delighted to have found and purchased a pair of ‘Keen’ sandals, robust and comfortable they have been brilliant in hot weather and cold, trekking mountains and rivers. Alas, after several days hiking in Thailand through rivers what I didn’t expect was that drying them by the camp fire might lead to them melting. Not by very much, I kept an eye on them not to perish, just enough for the shoe to develop lumpy pointy bits along the edges. This was a bit of a blow. Not to be disheartened, I trimmed said ‘pointy bits’ and bandaged them with plasters, good as new. I had the fabric mended in Chiang Mai as the stitching had come a little loose as well and gave them a bit of a clean with the sponge that had been dropped once too often in the open showers in the mountains. They would be fine. 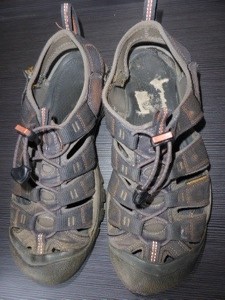 These shoes have taken me along the edge of Lake Baikal in Siberia, climbed the Great Wall of China and hiked the mountains of Northern Thailand following elephants in the wild. I really can’t replace them. 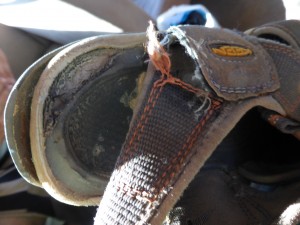 It came as something of a surprise to learn that locally, Kota Kinabalu is the place many many people come to shop. There are very many ‘shopping centres’ granted but all look decidedly unlikely places many would actually come to ‘shop’. More akin to a collection of dodgy market stalls with a roof. They all seem to sell the same things, mostly small electricals, endless arrays of plastic things, ‘souvenirs’, multi coloured polyester clothing and pre packed food stuffs of similar colours. None of which looks especially interesting. I was not surprised to later learn that everything sold is imported. So no little fair trade shops selling locally produced handicrafts. The ‘handicraft market’ sadly seeming to be a collection of mass produced items imported from the Philippines and China and more worryingly several with objects of ‘decoration’ made with shells and coral, and large signs saying ‘no photo’!

So wandering around KK after the tour ended I wasn’t expecting very much. An unlikely looking shoe shop drew me in, however, and (while no true replacement for my beloved Keens) I spotted some shoes that I thought might be a good alternative.

Expecting to be told ‘no’ I asked for my size. The first was a ‘no’ but the second a possible. The sales assistant disappeared and returned with one shoe. I tried the shoe on and asked for the other. I also (as I am used to doing) asked for another size. She returned with one shoe. We spend some time doing this before I realised she was also disappearing with the shoes already presented to me as soon as I took them off. As you might expect this made the whole ordeal somewhat more long winded and she became increasingly frustrated with me as I wanted to keep hold of them and insisted on trying two shoes at a time (one on each foot). I looked around me to see how this was being done in other parts of the shop but learned little. Never had I encountered a sales assistant so apparently intent on not assisting me in sales, disinterested yes, but not actively preventing me from buying something. This did not need to take very long. There were essentially three options. Not for the first time I lost any sense of time passing. This really is a peculiar place. There were many other people in the shop, although I don’t think I actually witnessed anyone else buying any. There were no windows or natural light. The stock room was in the attic I later saw, with arms and boxes emerging from the ceiling at intervals. Thus each time a shoe was returned, it then had to be re found and delivered if requested again (ie to try on the other half of the pair).

I did find this trying but it became something of a quest to master the technique of shoe buying in Borneo. At last, a pair of shoes were passed to me and fitted, almost delirious I asked to buy them. Anticipating more hurdles at this point, aside from the confusion that I didn’t want the box (or a plastic bag) it became surprisingly straight forward. I handed over money and the shoes were mine! Bordering on the hysterical I exit left. 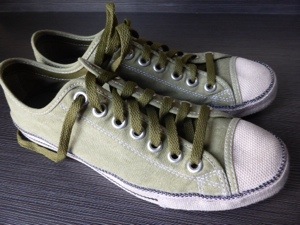 New shoes have a lot to live up to.

One thought on “Shoe shopping in Kota Kinabalu”