Aside from learning that the railways are king in rural Saskatchewan, I also had a lesson on elevators this week.

Central to life in this area for the farming community, elevators are also the reason there is a place called Bexhill in Canada at all. Strictly speaking the train was first, but the elevator was needed for the train to have reason to stop. They are one of the few landmarks in prairie country of any height, so are significant in their stature as well as their function. In 1927 when the railway track was extended from Assiniboia southwards, elevators were built at the stops the train made. Principally for the transfer of the grain harvest, they would also be used for other things, to store coal for people to access for example. In Bexhill there was another shed alongside the elevator, heated, so that cream and milk could be left out for the train to collect, and not freeze in the winter. A flag would be put up to signal to the train coming through that there was something to pick up, be it produce or people. “You could set your watch by it” I’ve been told several times while in Assiniboia, the train was so punctual, coming through twice a day. It provided a link between farmers and their families, and the wider community. Everyone had a few cows, so could sell milk or make cream to sell as well as the grain they grew. Nowadays lentils, peas and canola grow as well as wheat and barley. 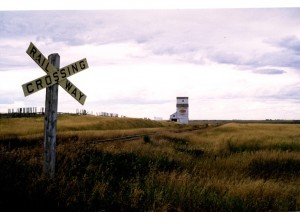 Bexhill after the elevator was removed, Louise Kenward (2014)

I’ve been so concerned about the winter times, having been urged so severely not to arrive until at least the end of May, that I’m curious what does happen here when everything is frozen, covered in snow, and 40 below. Art tells me that the roads would be accessible still, that he remembers having to walk home from school on occasions, following the snow fence for his bearings. He also told me that more than once he had tipped over with the wagon as compacted snow makes a solid ridge, less forgiving than that the more recently fallen. In general though it seems that things just carry on, the elevator would be heated so continues working and people just don’t go out so much, if at all. 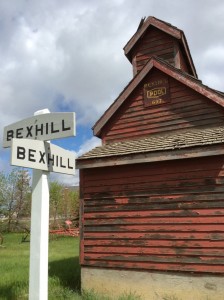 The elevator in Bexhill continued to be in operation for nearly 50 years, and remained a landmark for a good deal longer. But as horse and wagon moved to tractor and trucks, it was easier to transport the grain to neighbouring Assiniboia. Five miles along the road was no longer much of a distance to travel. As trucks got bigger and carried larger loads, so the smaller elevators could not cope. Fewer and larger elevators are being used today and many have been dismantled. A unique icon of Canada they are of historical and architectural significance as well as uniquely identifiable markers on the landscape. 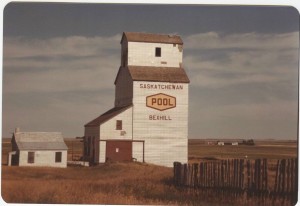 Photograph of Bexhill elevator taken the evening before it was demolished. Very kindly contributed by Rose and Dave Young, photograph by Dave’s uncle, George Young (1982).

And so, Art goes down in history as the last farmer to deliver to the Bexhill elevator in 1976. He is mentioned in all the local history books and is something of a local legend, everyone knows Art. I am very lucky to have had such a good guide.